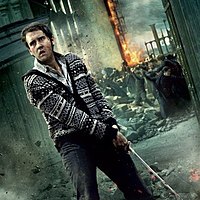 “Hold the Fort, Neville,” Harry told me as he walked out of The Great Hall in search of the Diadem. The castle was in chaos. Along with Professor McGonagall and others, I went out to the courtyard when the Professor told me to blow up the passage to Hogsmead. For a minute, I could not believe it. I asked her twice if that is what she wants me to do. After her approval I along, with others, headed towards the passage and waited. There was an eerie silence until I heard indistinct shouting and growling. They were approaching. I could feel my heart pounding. Thanks to the protection spell cast by the professors all over the premise the first few death-eaters couldn’t make their way. Upon seeing that, the others stopped. It gave me a feeling of confidence. They could not surpass the shield. “You and whose army?” I taunted.

My feeling of conviction was short-lived. Voldermort had cast a counterspell and destroyed the shield. I stood there numb. The death eaters all looked at me. One of them sluggishly, put his leg forward to make sure that the shield was destroyed, and gave me a smirk. It felt as if death was looking at me, and then it happened. They charged towards me. I ran, destroying the passage on my way. I briefly looked back and saw four death eaters still following me. I looked in front of me and saw Ginny and others. To end it once and for all I cast a spell a couple of centimeters behind me and the entire passage burst. The death eaters screamed and the passage was ablaze “Neville!” I heard Ginny screaming. I clung to some part of the wood and pushed myself up until I could see Ginny and others standing.

We returned to the castle and saw Hogwarts burning. Everywhere we saw lifeless bodies and smoke. We were fighting as many death eaters as we could. “You have fought valiantly but in vain” we heard a cold voice. It was Voldermort. He commanded his forces to retreat and asked Harry to join him in the Forbidden Forest and confront his fate. Professor McGonagall ordered us to take all the bodies to the Great Hall to dispose of them with dignity. So many familiar faces now laid lifeless on the floor. People were sobbing. The Weasley family lost Percy and Fred. Professor Lupin, Tonks, Colin Creevy – they all were gone.

Harry asked me to kill Nagini and told me that he is going away for some time. Without giving it much thought, I nodded and walked away. It was sometime later I got to know that he had gone to the Forbidden Forest. We all waited anxiously. After what seemed like years, we saw Voldermort with his army of death-eaters emerging from the forest. “Harry Potter is dead!” Voldermort announced. Professor McGonagall, Ginny, Ron, and Hermione all broke down. “This cannot happen!” I thought to myself.

“He was killed while trying to sneak out of the castle grounds,  said Voldemort. I could not keep my anger inside me anymore. I scuffled, and cast a spell towards Voldermort, without giving it much thought. He defended himself and then attacked me. I couldn’t feel my legs anymore. I laid on the ground whimpering even so I got back to my feet.

“We need people like you,” Voldermort stated. “I’ll join you when the hell freezes over,” I replied. He aimed his wand at me, and forced the Sorting Hat onto my head, and set it ablaze. I couldn’t move. And then a lot of things happened at once. Grawp came lumbering, an uproar from the boundary was heard- it was the centaurs. As everyone was distracted I moved and in one swift motion and freed myself from the Body-Bind Curse. The Sorting Hat fell from me and, I pulled out the Sword of Gryffindor and, with a single stroke sliced off Nagini’s head,  Voldermort screamed as the snake’s body thudded to the ground at its master’s feet.

“HARRY – Where’s Harry?”  Hagrid shouted. He was alive. We all went to fight the remaining death-eaters. Many had escaped fearing for their lives. Chaos reigned. Ron and I were bringing down Fenrir Greyback; centaurs were fighting, valiantly and, even the house-elves swarmed waving carving knives. Harry and Voldermort were in the courtyard after some time. Everyone had their eyes on them. We heard the high voice shriek as Harry too yelled, targeting Draco Malfoy’s wand at Voldermort.

And then there was silence.

Tom Riddle hit the floor, his body feeble and shrunken, Voldemort was dead.